Between work and family, it’s hard to fit exercise into a busy schedule. Striiv Play is is the next generation Smart Pedometer; one that turns fitness into Play — making it easy to be more active, lose weight, and step into a healthier lifestyle. Striiv goes beyond numbers and charts. It links via Bluetooth 4.0 to your iPhone 4s/5 to compete with friends and family, hit personalized goals, or play games powered by walking. It provides instant feedback on steps, stairs, calories burned, and your milestones with a large high resolution OLED screen.

Basic Trouble shooting steps
The device needs to be charged for at least 30 minutes before using it.Please make sure the cable is plug in completely. The screen will not be on when the device is charging. It means that there is no light or sign on the screen that shows the device is charging. The screen should be black. Once the device is charged, turn it on by pressing the Scoll Button. If the screen is not turning on, perform a Reset by inserting a paper clip into the Reset Button. Press on the Scoll Button and the screen should be on. Then unplug the USB cable. The Reset Button is next to the Charging Port. The Scoll Button is at the front of the device. The steps are listed in the Quick Start Guide. See the attachment. For the customers future queries, please send an email to customercare@striiv.com

Too busy for the gym? Striiv gets you fit and turns fitness into “Play”, even on your busiest days. While other devices only track what you do, Striiv takes activities you enjoy, like competing with friends and playing games on your phone, and turns fitness fun into real results. The majority of Striiv users lose weight – over 13lbs on average. Ditch the graphs, and join the fun!

Striiv has been featured in the New York Times, USA Today, CNN, and People. Try the product that has everyone walking A LOT MORE!

*Based on 2012 Striiv sourced user survey

Get Fit with Friends

Did you know that one of the best ways to get fit is with your friends? (in fact, having just one friend on Striiv will get you to walk an average of half a mile more). Play and compete with your friends and family, and see how you stack up to their daily average and personal best. The Striiv iPhone App makes it easy to link friends on Facebook, email, or text message. Game on! 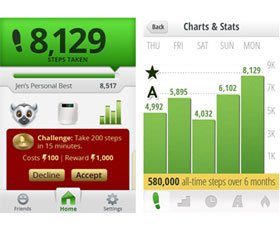 Have friends that don’t have a Play? Are you considering other trackers? No problem! Download the free Striiv app (striiv.com/free) on your iPhone or iPod Touch today, and you can link your Striiv Play device at anytime.

The concept is simple — play addictively fun games powered by walking and you will get fit. Imagine taking your favorite games on the iPhone and combining them with your real world activity. Don’t be surprised when you find yourself walking up and down the stairs at 3 am trying to earn extra points!

Striiv Play is packed with premium features like counting stairs with a high-precision altimeter, a high-resolution, ultra bright OLED display, and a soft-polished stainless steel clip for maximum comfort and durability. In addition, the Play is water-resistant to prevent damage when working up a sweat. The Play also features a large high-resolution OLED screen that displays your stats clearly — even under sunlight.

See Your Results. Get Motivated.

Striiv tracks your steps, stairs, calories burned, distance, and minutes of activity. Achieve your weight loss goals and watch as you “Play” the pounds off with the built-in weight tracker.

We’ve partnered with MyFitnessPal, the largest free online health community, so you can track your diet and nutrition along with your activity. MyFitnessPal allows you to track what you eat to meet your daily calorie goal and features the largest food database with over 2 million foods. Striiv Play links seamlessly to your MyFitnessPal account so you can see how much of that milkshake you’ve walked off.

In addition to the 3-D motion sensor and high precision altimeter, Striiv’s anti-cheating algorithms provide an additional layer of accuracy. Other trackers report up to thousands of “fake steps” from car vibrations or random movements each day, but Striiv’s proprietary TruMotion(TM) technology detects and filters them out to provide the best accuracy in the toughest real world conditions.

*Results are from a survey study conducted by Striiv in April 2012.

Products
About Fitness Technologies
Fitness-Technologies.com participates in the Amazon Services LLC Associates Program, which is an affiliate advertising program designed to provide a means for websites to earn advertising fees by advertising and linking to amazon.com
Product categories
Affiliate Disclosure

Affiliate Disclosure: As an Amazon Associate, we may earn commissions from qualifying purchases from Amazon.com. You can learn more about our editorial and affiliate policy .